Like I need another hole in my head!! My resolve to finish up projects and only start new ones as I get others done has flown out the window, so to speak. I wanted something different to show off this week that was small and quick because I have been working on a large-ish cowl and a lap blanket for the past couple of weeks and they are becoming boring to show off and going so slowly, so I cast on a couple wash clothes. They are small, quick and brightly colored which is a big change from my previous projects… 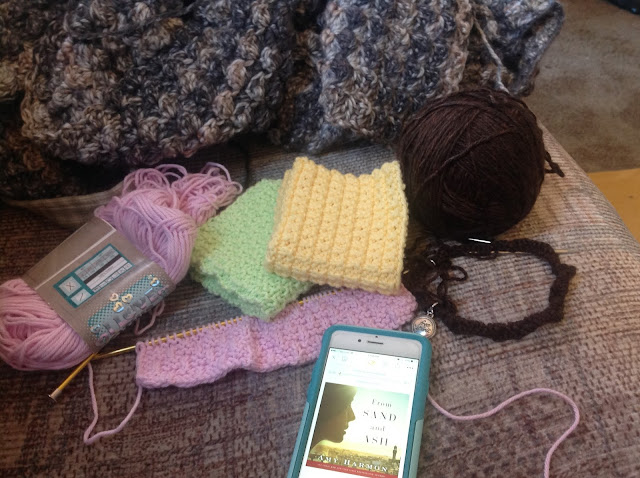 Also, my daughter asked for another KitKat Hat (not politically motivated, she just really likes cats:).
This time she wanted one in brown and since I already had the yarn for it, I cast it on right away. THEN I went to the craft store, not for yarn, but you know I had to at least look and I found some really fun yarn that I think will look great with the Knit Night Hat. I was going to go ahead and cast that one on too, but I found out that the needles that I am using for the ribbing on my daughter’s hat are the same needles I need for the beginning of this hat. Hmm, good thing I don’t have a good yarn store close or I might have needed to get more needles too!!

On top of this, I am set to take part in a MKAL by Helen Stewart of Curious Handmade that starts next week. I am all ready with needles and yarn, and while purchasing the yarn for that I decided that I like it for Celes wrap by Jared Flood too. I had started a couple years ago and then changed my mind on the yarn. AND I really want to re-cast on Project Peace (in which I will use the yarn I pulled out from Celes to use on this:).

I was doing so good, keeping myself from a huge ‘Cast On ALLLLLL the pretty little things’ party, but now, not so much. We will see how this plays out:) Besides, this is the fun part anyway!!!

Reading: I finally finished ‘Rent Collector’ by Camron Wright. It was pretty good, but really slow. The end was moving and I am happy I forced myself to finish it. I also listened to ‘To Die For’ by Alice Clark-Platts. It was a short story and very different from the other. It was kind of dark and not great, but a good change of pace. (Some cursing, a suicide, an attempted rape — just so you know before you ‘read’ it).  I am getting ready to start ‘From Sand and Ash’ by Amy Harmon and I really don’t know anything about it. Hopefully it will be a good one:)

Linking with Ginny of ‘Small Things’ on her Yarn Along/Read Along blog hop and with Nicole of Frontier Dreams and her ‘Keep Calm and Craft On’ blog hop.

Begin typing your search above and press return to search. Press Esc to cancel.